Still life from a wonderful 6-week workshop with Dean Fisher. He shared with us many insights and approaches which I found intriguing and helpful, though, for me, not always so easy to put into practice! This was thoroughly enjoyable, and I hope to continue with his encouragements in mind. If you are curious, the light bulb on the left is a (true) vintage with a ceramic base, the one on the right is from the light bulb collection of my husband, and the tiny ceramic dish is by ceramicist and sculptor Sophia Sutherland of Elk, California.
black tomato - a tiny sketch of two black fruits over an acrylic pour painting. The tomato was red and deep brown on the inside.
Quick study of a baby about two yo. #oilportrait #childportraits #portraitpainting #littlekidpainting
Wiggle Room! At six, losing teeth can be fun! #oilportrait #childportraits #losingteeth #portraitpainting
Happy Valentine’s Day! #happyvalentinesday #oilpainting#painttomato #stilllife
Trying out painting in black. Rough, but I sort of like it that way. #paintingoftheday #blackpaintings #oilpaint #oilpainting #stilllife @sedwickstudio

Sunsets are so dramatic, they become trite. It’s a lot of fun, however, to glob on tons of color! In reworking this one, it became illogical when I added the brightly lit waves in conjunction with the deep orange and yellow sky, but I like it anyway. It may stay this way. 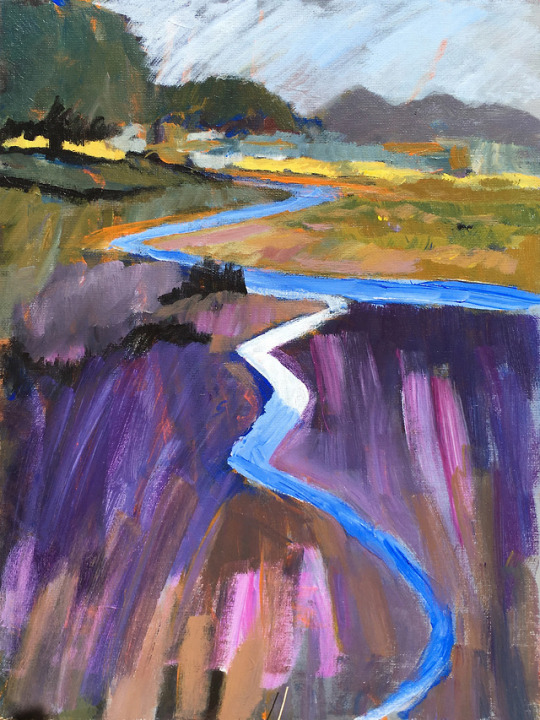 alla prima – over another painting. why does this work more frequently than when painting on a blank canvas?? Maybe it’s more freeing, since you feel like the original, no matter how hard you worked on it, wasn’t working and so whatever you do will be better than ditching the canvas? It still needs a little work, but I like the rough and fresh quality of it, so hope not to ruin that. Wish me luck!

A friend of mine came up with an idea to create a mural in her garden just in time for her son’s shower. She thought it would make a nice way to bring her garden together. There were lovely flowering plants springing up and in pots and hanging, but there was a sort of “blank” place just in the middle – the back wall of her neighbor’s garage.

We had both recently been to the Monet: The Late Years at the DeYoung and found them lovely to be among. So, we thought, why not, let’s paint a Monet-ish style garden, we have two weeks…

She ordered the canvas, got the paints, we consulted with our muralist friends about types of paint, and we figured out how to hang it.

Well, we both got very busy. I went out of town, she was actually in the middle of deep cleaning in her storage. We started on the following Monday, five days before the shower. My friend mixed blues to make an interesting sky and off we went! Then she got engulfed in preparing her house for the shower. I wanted to make sure the mural happened, and didn’t want her to worry about that on top of everything else, and I’m pretty good at doing things quickly, so, I thought, why not! Things often take a bit more time than you think they might, of course, so Roz’ daughter-in-law, Shawna, came to help paint, putting in some of the water and all of the lilies, which was great. Somehow, we got it completed enough to be complimentary to her lovely garden, and Thursday evening Tim helped me finagle it behind her plants and we got it mounted behind the trellis. (I think we broke a couple flowers—sorry!).

The mermaid seems to be raising a toast as she emerges from the pond!

It was really fun, thank you Roz for having great ideas!

…in place in the garden:

The Pacific Ocean feels giant all along the coast south of Carmel. Maybe it’s the mountains alongside which partly give it scale.

This painting will go into the Arts Benicia member show next week, I hope you can join me at the reception!

—how to pronounce the name of this park:
put together two short sounds: gara + pata

Normally when I go out plein air painting, I do more traditional style painting. This time, the tree shapes were so distinct, and my view of them was so narrow (vertically), the ocean color intense, a few stripes of brilliant sun, that I sort of fell into this more graphic representation. The headlands became pure shapes in the second one, at top.

See these and more at Open Studios in Benicia!

With one foot in Alameda, one in Mendocino County—I will be joining two artists in a show at the Scharffenberger Cellers in the beautiful Anderson Valley. I will be bringing some urban scenes to balance out the bucolic!

Woods, Wine and Water
Explore the Intertwining of the Wild & Human

You are specially invited by
Micaela Marsden

I love the old Monterey shrimp boat at China Camp, and pretty much every time I go there I have to do a painting of it. The old flat-bottomed row boat has a really interesting color-texture on the bottom, so it became the focus of this painting. I started this sketch late fall and just got back to it today, working on the shadows and highlights, correcting colors and changing the sky from grey to blue. It’s always fun to play around with color, so at one point I tried purple shadows, but that drew too much attention–now, maybe a little too dark. The sky is not actually that blue, that’s just my camera’s interpretation!

Painting in my back yard with cascades of flowers can be fun too! The nasturtiums were growing with leaves the size of dinner plates, and the ever-present morning glory was being, well, glorious, so I had to try a flower painting. As it’s not my usual subject, I had no idea if it would become something I liked, but I kept some of it graphic, and for a very fast painting, I think it turned out well.

While out in my garden, I unearthed a small mosaic memorial I made for my cat about 10 years ago.

This is an “alla prima” or “all at once” painting from a few months past up on the Sonoma Coast. It works better from a distance than right up close, as you get more of the feeling of the coast stretching off South. I may work on it some more, in the studio.